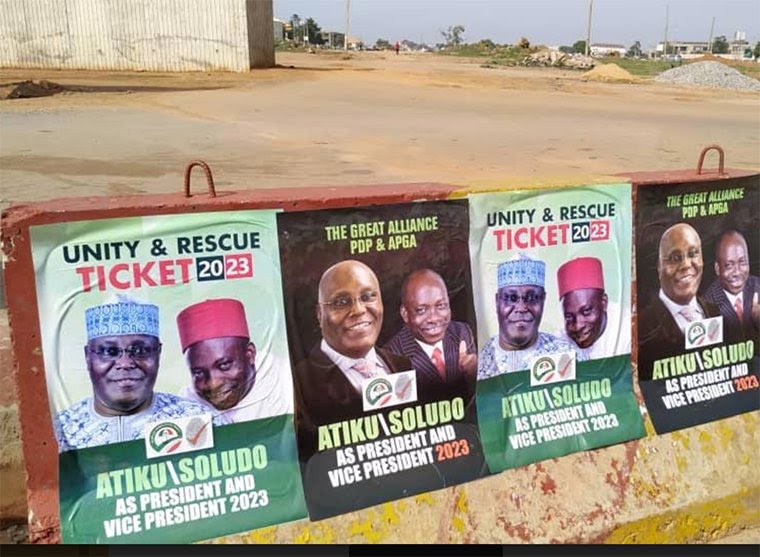 The sudden appearance of the campaign posters bearing the picture of former Vice President Atiku Abubakar and that of an erstwhile governor of Central Bank of Nigeria, Charles Soludo, is currently generating controversy among members of the All Progressive Grand Alliance.

Soludo, is the favoured choice of the APGA leadership as candidate of the party for the Anambra Governorship election scheduled for November this year.

Our correspondent observed on Sunday that the posters titled, “The Great Alliance: PDP & APGA. Atiku /Soludo as President and Vice President 2023, were conspicuously displayed along the favored Wuse area and the Airport Road in Abuja, the nation’s capital.

The posters which appeared in two different designs with both Atiku and Soludo, dressed in corporate and traditional attires, claim that only the alliance could rescue Nigeria from the brink of collapse.

A member of the APGA, Ben Okafor, who introduced himself as an APGA ambassador, said, “I pray this is not true otherwise, such alliance would obviously send APGA to extinction, a move to send APGA into extinction.

President of APGA Ambassador’s, Okeke Kenneth, said, “Soludo should have joined PDP and contested for the Governorship of Anambra if he thinks he is popular. Why use APGA popularity in Anambra State to go and join PDP Presidential ticket?

When contacted, Media Adviser to former Vice President, Atiku Abubakar, Mr. Paul Ibe said, “Soludo is of APGA, Atiku is of PDP. It doesn’t add up. We don’t where this is coming from.

“Wherever it is coming from it is surely for mischief. This is not a preoccupation of Atiku now. Atiku like all men/women of goodwill is preoccupied with helping to provide solutions to the nagging issues of insecurity ravaging the country and economic malaise marked by joblessness and poverty. Those are his preoccupation.”

It’s Just The Same Set Of People That We See Going To Power Always.
We Seriously Need A Change In Our Government.

All of them should get out

They are on their own

Make dem dey come we still no go vote them

Nothing we no go see

Well we all know that they’re going after their own interests but we don’t have a choice cause they’ll rig the election if they have to. Nigeria needs a real change not a political change

We no go vote

They are all bastard

They are all bastard

No way for them

They re all the same