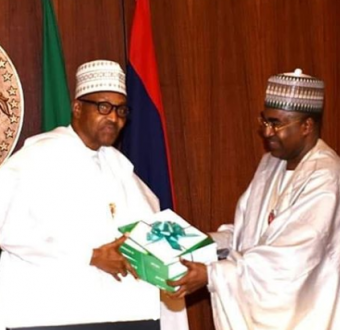 President Buhari on Friday October 18, received the Presidential Advisory Committee on the Elimination of Drug Abuse (PACEDA) report at the Council Chamber of the State House, Abuja.

The committee was constituted in January to research on ways drug abuse in the country can be eliminated.

Speaking at the meeting, President Buhari reiterated the commitment of his government to the welfare of the citizenry by fighting the scourge of drug abuse.

“Winning the war becomes one of the critical elements of the Next Level mandate of this administration. As a government, we have the responsibility to ensure the security and well-being of our people.

“Our findings have shown that it is more difficult to bring down crime rate to acceptable levels without clearing our country of substances abuse,” the President said.

He also called on all well-meaning Nigerians and international partners to join hands with relevant government agencies in the fight against drug abuse. Buhari also assured the committee that the matter was of utmost importance and the report would be studied along with the recommendations.