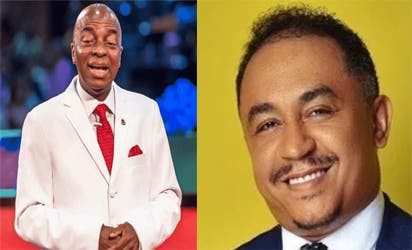 Controversial media personality, Daddy Freeze has finally tendered an apology to the founder of the Living Faith Ministry, Bishop David Oyedepo after verbally assaulting the clergyman.

In a video which was drawn attention to by Port Harcourt-based pastor, David Ibiyeomie, Freeze was seen calling the clergyman a bald-headed fowl. This angered some pastors like Ibiyeomie who stood on his pulpit to lash out at the media personality.

During a Sunday service over a week ago, Ibiyeomie described Freeze as a ‘Bastard’ for attacking Bishop Oyedepo, whom he referred to as his father.

Following suit was Pastor Paul Enenche of the Dunamis International Ministry, who released a video to address the insult by Freeze. He also referred to the OAP as a ‘mad dog with bipolar’.

Following the drama, Daddy Freeze has offered an apology to Oyedepo for the disrespectful remark.

Daddy Freeze apologises to Bishop David Oyedepo for referring to him as a "Bald-headed fowl" The video which Freeze released almost three years ago, recently generated controversy after Port Harcourt-based pastor, David Ibiyeomie, stood on his pulpit and verbally assaulted Freeze. Ibiyeomie while preaching, said he would not be alive and watch Freeze whom he described as a "Bastard", attack Bishop Oyedepo whom he described as his father. Pastor Paul Enenche of the Dunamis Church in Abuja also released a video attacking Freeze for disrespecting his elder, Bishop Oyedepo. He referred to Freeze as a 'mad dog with bipolar" Well, Freeze has now tendered an apology to Oyedepo for the disrespectful remark.