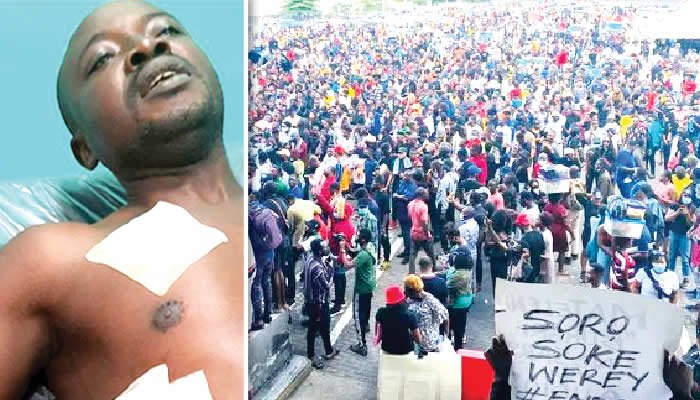 In this interview with ENIOLA AKINKUOTU, a victim of the October 20, 2020 #EndSARS shooting, Nicholas Okpe, recounts his experience at the Lekki tollgate one year after

Why did you take part in the #EndSARS protests last year?

When did you join the protest?

I started from the first day. The protests were not violent. There was food, water and everything. Ice cream and meat pie were given freely and it was well organised. We blocked the Lekki tollgate in protest but left that alternative route for motorists to use.

When did things turn ugly?

While on the protest ground on October 20, we received information that soldiers were coming to chase us away around 4pm. We resolved that when they arrive, we would not fight but only sit on the floor, wave the flag and sing the national anthem. The soldiers did not come at 4pm but around 6.45pm, we started to hear sporadic gunshots. That was when we discovered that it was the Nigerian Army. We then decided to sit on the floor. We assumed that if we waved the flag and sang the national anthem, they would decide not to shoot us but only ask us to leave but all of a sudden, they started shooting at us. Some people died while some were injured. I was shot and I was rushed to a hospital.

Were you given treatment?

On getting to the first hospital, I was given first aid and given honey but the blood that was supposed to come out began storing up in my stomach. On getting to the general hospital, there were no doctors. Then I was transferred to another hospital but no one attended to me. I was then directed to Grandville Trauma Centre where the doctor had opened his hospital for #EndSARS victims to be admitted. On getting there, I was admitted and they started treating me immediately. I was given oxygen, a pipe was fixed into my body to help me pass urine, and I was put on drip. The next morning I was wheeled into the theatre and a surgery was conducted on my thighs. They said they didn’t have a specialist that could continue some of the treatment. They said LASUTH could do it so I was transferred there but was first taken to Lagoon Hospital. At LASUTH, an X-ray was carried out and all the necessary treatments were given to me. The bullet that pierced my right chest didn’t touch any vessels. The doctors were stunned. As I was lying down facing up, the bullet began to drop until it went to my back and began to shoot out. They did another surgery for me. I told them I wanted the bullet and they said they would give me. People around me took photos of the bullet. I didn’t have a photo because I was not using a phone that had a camera. I was discharged November 8, 2020. I demanded for the bullet but they refused to give me till date.

Did you attend the judicial panel of inquiry set up by the Lagos State Government?

I have been going to the panel. They gave judgment on Monday, October 18, 2021 but no compensation was given to any of us that the military shot. No compensation was given to any Lekki victim. The only people given compensation were victims of police brutality and others who were victims of the Special Anti-Robbery Squad and whose husbands or brothers were killed over the years. But the Lekki one continued. The soldiers’ shooting was not handled well at all by the panel. I was told that it was because the soldiers refused to come for further hearings after the Lagos State Government denied inviting them to the Lekki tollgate that the soldiers got annoyed and stopped coming. The panel believed that since the soldiers refused to come, a judgment could not be given against them but the police kept coming to the panel.

How have you been coping with your injuries?

I still remember the trauma. Sometimes I get forgetful. Also, the hole in my chest is still there. I still have pains in my body. People borrowed money to help me and I cannot pay back because there is no compensation. This is another trauma and I am getting frustrated. A frustrated man can do the unthinkable.

I am a driver. I moved to Lagos nearly 20 years ago. I started driving in my state in Benue. I am married with two children. After the incident, they moved to the village. I was supposed to move with them but when the panel was set up, I said they should go while would I stay back and submit and defend my petition. I was hoping that once they compensate me, I would be able to continue with life. But they have denied me any compensation. How do I go about it? Should I steal to survive after all that I have witnessed in the arms of the Nigerian Army?

As I am I cannot lift myself easily. I cannot life a bucket of water. I usually seek assistance from my neighbours. It is people that give me little money here and there.

One year after the protests, do you think the demands for police reforms have been met?

I keep hearing stories because I don’t go out as much as before but I see videos in social media of the police harassing innocent citizens. It is just a police thing. May be it is because they are not well paid. The police are give guns and are still underpaid while politicians are looting the treasury. If there was good governance, we would not have banditry and other issues currently bedevilling the country. Let the government do the needful before things get out of hand. I am supposed to still be in the hospital receiving medical care. I had thought that when I am compensated, I would go to the hospital to get medical attention but here I am.

Do you regret taking part in the protest given your ordeal?

Honestly, for my compensation not to be paid it hurts me but I will never back down because there are people whose lives were wasted. And if we stop this struggle, their spirit will never be happy. Forward ever, backward never. Until this country becomes great, we will continue the struggle. Nigeria is a blessed country with great potential but look at what it has become?

Police say they will not allow another protest. What do you think of this warning?

I heard the warnings. I even saw armoured cars parked there as if attackers are coming there. They are already portraying us badly. We are only coming there peacefully as we did the last time. Hoodlums hijacked the protests because security personnel started killing protesters and that was when everything scattered and things went out of hand

Will you join this fresh protest?

By the Grace of God, despite my ordeal, I will join the protest because we are not going there to make trouble but just to mark a one year anniversary to remember our fallen heroes who fought for the betterment of our country. What is the hope of our children if we don’t take action today?

Our intention is not for violence but just to mark the one year anniversary. We will carry placards and lay wreaths for those who died. What if I had died? Wouldn’t I have wanted to be honoured? So many victims of #EndSARS are still in detention. We will also speak on their behalf to demand their release

“SARS Has Been Disbanded No Need To Continue Protest” – Senate President