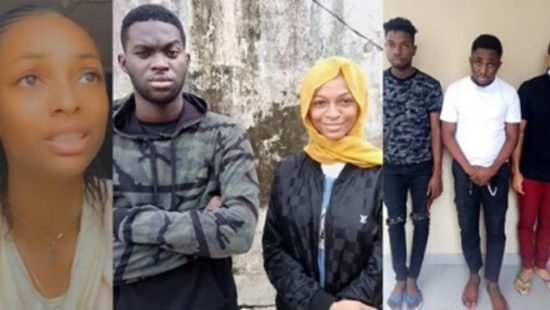 The EFCC Zonal office has Arrested a social media influencer, Adedamola Adewale and four others for allegedly internet fraud.

According to reports the five suspects were apprehended in different places in area of Lagos.

Adedamola Adewale, a 20 year old girl, and his accomplice, Lamina Hamzat Ajibola, were arrested at the Agungi area of Lekki, the trio of Israel Onyebuchi, Emmanuel Olayode and Valentine Nwokorie were picked up at Ibeju-Lekki.

According to EFCC,the arrest of Adewale and Ajibola was link to internet fraud activities linking Lasisi Wasiu Adeleke and Lasisi Riliwan Adeniyi, who are at large.”

The statement said during interrogation, “Adewale, a self-acclaimed model, who goes by the username @adeherself on Instagram, confessed to being a picker” in cybercrimes.”

The other suspects Onyebuchi, Olayode and Nwokorie were arrested for their alleged involvement in a romance scam.

They were arrested during another raid, following a separate intelligence.