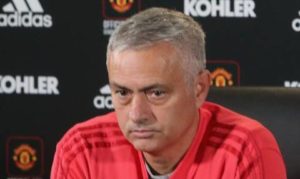 Tottenham manager, Mauricio Pochettino, did not exactly rule out taking over at Manchester United following Tuesday’s sacking of Jose Mourinho at Old Trafford.

Mourinho was sacked by United on Tuesday morning, with the club now looking to appoint a caretaker boss, before choosing a permanent successor to the Portuguese manager.

And Pochettino, who has been strongly linked with the United hotseat in the past, saw his name thrust into the spotlight once again on Tuesday morning following Mourinho’s departure.

However, speaking to the media to preview Wednesday’s North London derby clash against Arsenal in the Carabao Cup, Pochettino did not exactly entirely rule out jumping ship.

“There are a lot of rumours about my position as manager at Tottenham. I cannot answer this type of question.

“The business you know very well, a lot of rumours happen. I’m so focused in trying to deliver my best in this football club,” he said.

Asked what he thought of United’s decision to end Mourinho’s tenure, Pochettino continued: “I feel so sorry because you know very well I have a very good relationship with him so it’s very sad news what happened today.
“It’s not my business what happened today and only I want to send my best wishes to Jose.”

Chelsea To Host Man Utd In FA Cup Fifth Round