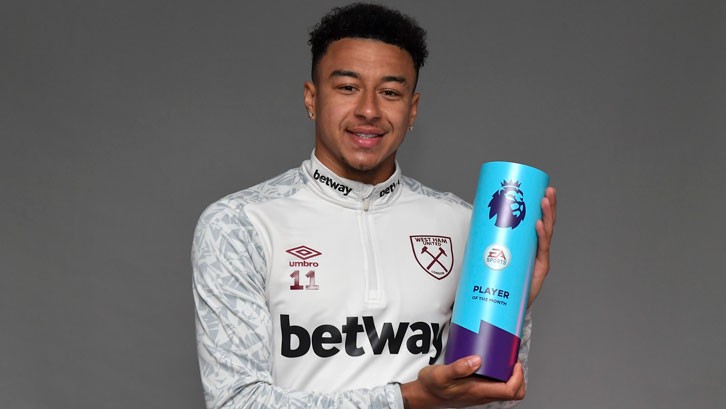 Jesse Lingard Named EPL Player Of The Month For April

The West Ham United and England forward was recognised by supporters for his outstanding performances in Claret and Blue, which saw him score four goals and assist a fifth in his four appearances.

After being nominated for the award in both February and March, the 28-year-old made it third time lucky, and he was thankful to every supporter whose vote helped him secure the award for the first time in his career.

“It’s amazing,” he said. “It’s the first time in my career that I’ve received this award and I’d obviously like to thank the fans for voting, my teammates and staff for helping me get there. It’s been a long road and I’ve been nominated the last two months and even getting nominated was a great feeling for me as I want to be up there with the best and competing for the best awards.

“I definitely think I’m in the best form of my career. I’ve always wanted to work on consistency in my game and I think it’s come at a good time. Playing regular football always helps and I want to improve every game and try and help the team get as many wins as possible.”

The 28-year-old scored four goals in four league games last month, taking his tally to nine for the season since joining West Ham on loan at the start of February.

Lingard had not played a minute of Premier League football this season prior to his Manchester United exit, but has been directly involved in 12 goals since his arrival at West Ham.

Lingard: I came close to ‘timeout’ from football

The transformation has seen Lingard win back his England place for the first time in two years – ahead of this summer’s Euros.

Lingard, who was a regular starter for England at the 2018 World Cup, recently revealed he came close to taking a ‘timeout’ from football during lockdown, as he battled mental health issues and his mother’s depression.

“I was going into games happy sitting on the bench, and that’s not me,” he said. “My mind wasn’t there, I wasn’t focused at all.”

“I’ve had other doctors that have helped which has been brilliant and, during the lockdown, I got my head together.

“I feel lockdown has transitioned me in a way. I watch my old games back, the World Cup games and the old games I used to play, and I think, ‘yeah, that’s the real Jesse Lingard’.”