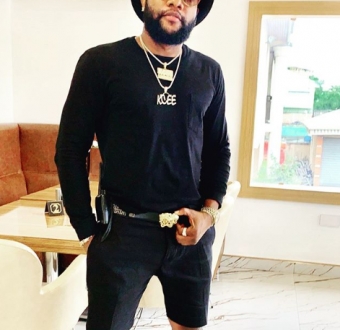 Kcee has pushed the blame of celebrities living fake lives as witnessed in the Nigerian entertainment industry on the fans.

Alleging that most celebrities lead fake lives, the Five Star Music boss stated that people don’t like it when one is real. He further disclosed that this pressure pushes many into faking it till they make it.

“90 per cent of celebrities lead fake lives because you guys (the public) are putting them under pressure. People don’t like it when you are real; they prefer it when you lie to them, and that’s why many fake it until they make it.”

“If you are very honest and truthful with them (fans), your records will have slow sales. 80 per cent of celebrities rent apartments but they would claim they bought the houses. They go through that because fans put them under so much pressure. That you see someone on television does not mean the person is worth N1bn, so people should stop thinking that we’re living in heaven on earth” he told Saturday Beats.”

Kcee also admitted faking it at some point in his 19-year music career. He however stated that he now talks about it because he has moved past that stage and is now successful.

“Yes, I have faked it at some point. When I started, I had to fake it. To be a celebrity, there is a perception you need to sell so that people can look up to you. I am saying this because I have gone through that and I have passed that stage. I am now successful. There was a time I was driving a Hummer jeep while my then partner, Presh, had his own. We would go to clubs and use all our money to pop champagnes. At the end of the day, we would throw the drinks away and go back home to eat noodles. We wanted to impress people and make them see us as the most expensive artistes.”

“When I was in Ajegunle (Lagos) and I got to a level where I needed to leave that area, I used to tell people that I was living in Ikeja, though I was still staying at Ajegunle. Before you knew it, we started living in Ikeja and from there, we moved on to bigger things. There is faith life and also fake life. My own journey was always keying into that faith.”

“However, it got to a point that everything went to zero level, and when I had the second chance with Limpopo, my ideology changed. What came in then was maturity, and I made a lot of investments. I was able to buy things that even when I leave the earth, my children would inherit them” he said.

Davido Unveils A Track Off His Coming Project, A Better Time (Video)