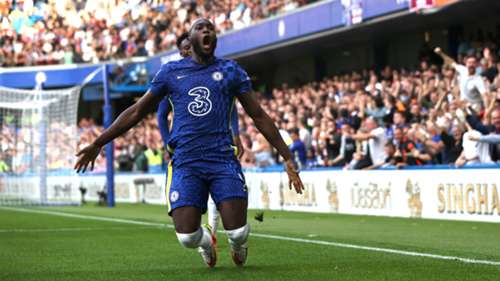 The Belgian bagged a brace to continue his superb start to the season, but suffered a pratfall in his attempts to commemorate the moment

Romelu Lukaku has vowed to retire his knee-slide celebration after the Chelsea striker took an ungracious tumble during the Blues’ victory over Aston Villa on Saturday.

The Belgian bagged a brace to continue his superb start to his second life at Stamford Bridge, keeping Thomas Tuchel’s side firmly in the mix near the Premier League summit.

But the striker’s attempt to commemorate his first goal was scuppered when his attempted knee slide fell short, leaving him in a comical heap – and the forward has now stated he will not repeat the feat.

Lukaku took to social media following the match – which saw Chelsea move joint-top of the table to keep their fine form flying across the opening weeks of the season – to issue words on his accident.

“No more sliding on my knees after yesterday’s celebration…”

The 28-year-old wrote on Twitter, the morning after the game.

No more sliding on my knees after yesterday’s celebration…

Though he provided no further elaboration, the Belgian’s words could be interpreted as a tongue-in-cheek rebuke to his own pratfall, which fortunately came at no expense to both him and his team.

While it remains to be seen whether the attacker will stick to his own vow, he is not the first Chelsea player to claim he will no longer celebrate with the knee slide.

In 2018, then-Blues attacker Eden Hazard confirmed that he would retire his celebration – a trademark of his time at Stamford Bridge – as it had become too painful for him to replicate.

On that occasion, the player delivered an actual message through club channels, complete with scabbed knees, to show why he was stepping back from the move.

There will be no more knee slides from @HazardEden10… � pic.twitter.com/WclFdINcak

As long as Lukaku’s decision to stop the knee slide does not affect his goalscoring form, Thomas Tuchel and the rest of Chelsea are unlikely to care.

The Belgian’s homecoming to Stamford Bridge has already far eclipsed a first spell marked more by loan moves elsewhere than success for the Blues.

Next up, Lukaku is expected to be at the forefront of the club’s Champions League title defence, which gets underway against Zenit on Tuesday.

Buhari Hopes To Retire To His Cattle Farm In 2023

Police Dismiss Killer Of Kolade Johnson, Free The Other Officer

Liberia President Forced Out Of Office By Snakes

Etinosa Uses Bible As An Ashtray While Smoking On Instagram

Okay, we don hear You Lukaku

It May Be For The Best

It May Be For The Best.