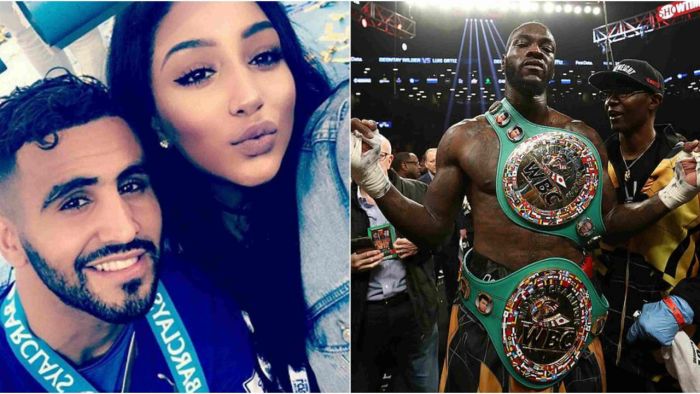 The newspaper quoted Riyad Mahrez friends as saying that Deontay Wilder and Rita were ‘chatting intently’ at boxer’s VIP table in the trendy Manchester nightspot, popular among big-spending footballers and WAGS.

“They were chatting intently, laughing and joking. You could see there was chemistry there and a real connection,” a source told The Sun.

“But because of where it was, a lot of people noticed how well they seemed to be getting along.

“It’s a club full of footballers and Wags, which even some of Riyad’s team-mates go to. Rita was actually on a night out with Riyad’s sisters who she really gets on with.

“And they did not appear to be happy with what was going on. One even seemed to go and get Rita, to take her away from ­Deontay, who was of course trying to keep her with him.”

Riyad Mahrez, a Muslim non-drinker who eschews the typical footballer lifestyle, was ‘devastated’ to hear how Deontay Wilder, the WBC champion and father-of-eight who is known for his freakish punching power, seemed to hit it off with Rita so quickly.

According to the report, Deontay Wilder spotted Rita from across the club and had one of his entourage invite her over to the table to meet him.

She knew who he was but wasn’t starstruck and soon the pair were enjoying an in depth conversation, in full view of Riyad Mahrez’s teammates and other revellers.

“Word soon got back to Riyad about what had happened. He knew about it by early the next morning. Riyad was shocked and a bit upset about it — and he couldn’t get his head around what was going on,’ the newspaper’s source added.

Rita married Riyad Mahrez in August 2015 and has has two young children with her.