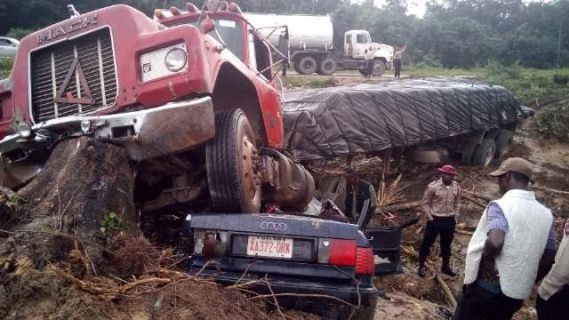 A Mack truck loaded with soft drinks crushed a woman
and her child to death in and also claimed the life of the truck’s Motor Boy at Ajibawo in Atan on Sango /Idiroko road, Ogun State.

The Spokesman, Traffic Compliance and Enforcement Corps (TRACE) on Thursday, confirmed the
accident to the News Agency of Nigeria (NAN).

He said that the accident occurred around 5:45 pm and was
caused by wrongful overtaking, complicated by loss of control by
the truck, marked, LSD 563 XW.

“In the process of overtaking another
truck ahead of it loaded with granite, the edge of the truck loaded with soft drinks entered a ditch which results in its fall, killing a woman and her child selling along the road and the motor boy.”

“The injured had been taken to
Oluwalogbon Hospital, Atan before the arrival of TRACE officials while the
corpses had been claimed by their
relatives,” he said.

DJ Cuppy Pictured At The Launch Of Pizza Hut In Lagos