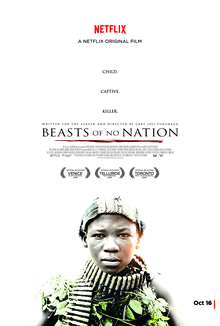 Beasts of No Nation is a 2015 American war drama film written, co-produced and directed by Cary Joji Fukunaga, who acted as his own cinematographer, about a young boy who becomes a child soldier as his country goes through a horrific
war.

Shot in Ghana and starring Idris Elba , Abraham Attah , Ama K. Abebrese , Grace Nortey, David Dontoh, and Opeyemi Fagbohungbe, the film is based on the 2005 novel of the same
name by Uzodinma Iweala ― the book itself being named after a Fela Kuti album.