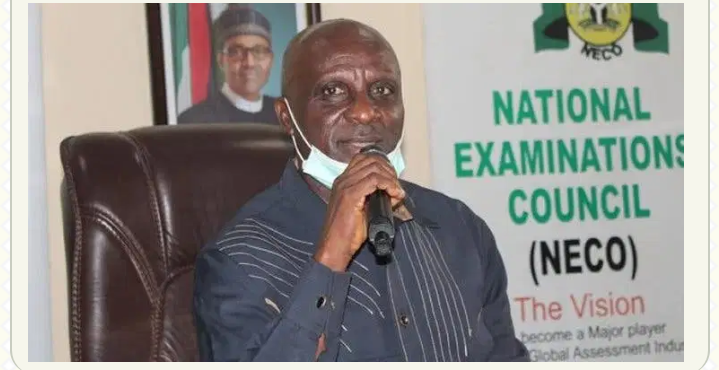 Obioma, according to some source, died Monday night in his sleep in his Minna residence.

The Director, Human resources of the NECO, Abdul Mustapha confirmed the death of the NECO boss, said he died in his sleep as a result of heart failure.

Mr Mustapha forwarded communication from Obioma’s second son, Prince Godswill Obioma, informing him of the death of his father thus:

“Dear Sir, this is to formally inform you that my father, Prof. Godswill Obioma, the Registrar/Chief Executive of NECO passed to eternal glory yesterday 31/5/2021 after a brief illness.

“We request that you kindly notify the Board, Management and the entire staff of the Council of this development.

“We shall keep you duly informed.

“Prince Godswill Obioma the 2nd, for the family.”

The release of the conversation between the deceased son and Mustapha contradicted some reports in some online and social media platforms alleging that the NECO boss was assassinated in his Minna residence by some unknown gunmen.

Frank Uduak-Akpan Father: If Death Penalty Is His Punishment, He Should Face It
previous post

Mike Tyson Slept With Prison Counselor To Reduce His Sentence

17 Men And Women Mysteriously Lose Their Private Parts In Benue

Pretty Sorry To Hear That, May He Live On.