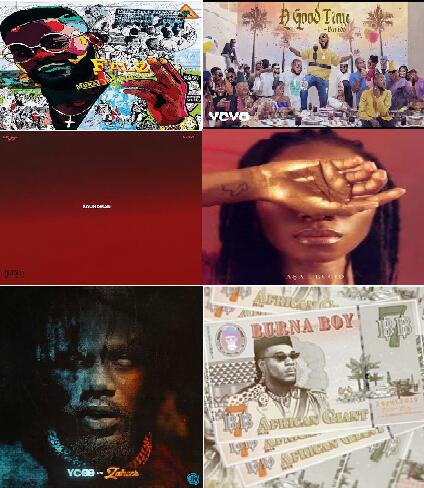 It was an interesting journey for Afrobeats in 2019, as it rose all the way up in the music ranks across the globe, making the “Afro beat to the world” a well pronounced mantra amongst Nigerians and neighboring countries. Notably, Afrobeats was graced with over 30 albums and EPs combined, Wizkid gave us a surprise EP, Fire boy dropped his debut album, Nairamarley also capped 2019 with back to back hits, and worthy of mention is our Portharcourt boy bagging a Grammy nomination. Stay glued to the page as we give you the perfect breakdown of the top albums with a matching lists of Artistes who had an amazing year.
Below is our list of Best albums/ Artistes of 2019. This is based on content and quality of the music, Awards and recognition, Commercial success and concept.

African Giant – Burna Boy
We didn’t expect Burna to drop another album last year considering the fact that he dropped an outstanding album the previous year titled “Outside”, but Burna’s team did what they had to do by striking while it was still hot, they deserve a lot of credit for how far Burna has come. On the 26th of July 2019 Burna dropped the Magic that triggered his path to a Grammy nomination making the Atlantic Records Signee the 2nd Nigerian to achieve this. Our best wishes are with him and we hope he brings this home and become the first to do so. Although Burna had dropped some of the tracks from the 17 tracks album as singles we still had every reason to be satisfied with new tracks such as destiny, gum body and several others.

Burna isn’t resting on his hoarse as he has more to give in 2020, and its looking like a feature with Buju is the works.

Before delving into the breakdown of fire boy’s 2019, Olamide deserves a lot of credit for the talents he has raised, and Fireboy is no exception as he duly delivered on this timeless piece of art. This is an album you’ll play few years from now and still have the electrifying feel.
Fireboy showed us how much talent he has by giving us a 13 tracks masterpiece with no feature. Amazing!.
Album rating: 8.5/10
Statistics: TLG amassed over 100 million streams on all platform. Fire Boy also won an Award for Listener’s choice (jealous) from Sound City in 2019.

Falz’s album was a masterpiece that mirrored the Nigerian society. He sampled of some of fela’s songs and remodeled them into modern day classics.
Album Rating and awards: 8/10
Satistics: It won the Best Rap album and Album of the year at the Headies.
4. Clone wars IV – SHOWDEMCAMP

This is a reflection of growth and how they’ve moved on from 2018 achievements and looking forward to bigger ones. The 14 tracks album reflected their consistency and how high they hold the standard of their music.
Album Rating: 8/10
Statistics: There isn’t much to write about the album in terms of statistics but the album remains a solid body of work.
5. Lucid – Asa

Asa made a comeback to the Nigerian music scene with Lucid having dropped her last album in 2015. The 14-track album didn’t disappoint has it had enough content to keep listeners glued from track to track. I recommend this album to anyone who’s just purely after good and raw music.
Album rating: 8/10
Statistics: Though it didn’t receive any recognition the album still remains a classic and deserves way more attention.

Wurld’s music has never been in line with the modern tune as his style is a fusion of different sounds. He enjoyed success from this album with a fusion of fuji, juju and Afrobeat. Worthy of mention is the fact that he featured on Davido’s album and Davido’s biggest 2019 hit “Blow my Mind”.
Album rating: 8/10
Statistics: Wurld Won Best Male vocalist at the Headies award.
7. A good Time –Davido

Davido is no stranger to the music scene both locally and internationally. A good time was an album with great vibes that left every listener on strings. He had several features on the album including Summer walker.
Album rating: 7.5/10
Statistics: Davido won the Digital Artiste of the year at Soundcity Awards. A Good Time became the first Nigerian Album to reach No.1 on US Pop Itunes Chart. A Good Time also had over 6 songs on Top 10 Nigeria Itunes few hours after it’s release.

Ycee gave us a 15 solid track album. It displayed his singing ability and also reminded us how criminally under rated he is as a rapper. It featured hit tracks like vacancy and Dakun.
Album Rating: 7.5/10
Statistics: Ycee also didn’t get any recognition. The Nigerian “ignore the good” syndrome we guess.
9- Mandy and the jungle -Santi

Keeping the alte style alive the 16 project features Kida Kidz and various other artistes. The album focused on Sex, obsession, love and romance.
Album rating: 7.0/10
Statistics: The album got a 6.0 rating on pitchfork and didn’t garner much attention.

Every year is Wizkid’s year since the 2010s. This guy has been dishing us raw hits every year and last year we were starting to seem ungrateful. There was this unusual criticism his songs were getting but no one can stop starboy. He rounded up the year by releasing a surprise EP with jams like Jam (no pun intended), Blow and others. We look forward to his made in Lagos album this year.
Album Rating: 7/10
Statistics: No 27 on Audiomack with 8m+ listens, 4.7m+ views on you tube.

Some other Artistes whose album or EP didn’t make the cut but also impressed in 2019 are:
Naira Marley: The most controversial artist of the year, he also gained a massive fan base called Marlians in a short period of time. Naira Marley started off with a controversy about supporting fraudsters which drew the attention of Simi and led to the Hit single “Am I a yahoo boy?” then EFCC gave him much needed publicity by arresting him which lead to his popularity and that of guccy branch. He was released on bail and afterwards dropped the street jam titled ”Soapy” the song topped various charts for weeks as the Marlian movement became stronger.” Opotoyi” was another hit we cannot forget. His EP called Lord of lamba was all we expected from the serial hit man, “Tesumole” was one of the hits from the album. Nairamarley won the Viewer’s choice with “soapy” at the Sound City Awards.

Rema: The youngster moves different, he’s a real artist with incredible range and flexibility. Rema is capable of toying with 4 different genres in one song. In 2019 he became a poster boy for Afrobeats by going on a debut tour in the US. Rema is the new wave, it’s not difficult to see it. He is an inspiration to the new generation and the next, they all love him. He won the next rated Award at the headies, Best New MVP at the Soundcity Awards, Video of the year AFRIMMA (Dumebi).
Joeboy: He was “empawad” by one of Don himself, Mr Eazi. Joeboy was major Act last year. He had numbers that can’t be unexplained for an artist who just began. He was on an unbelievable run, and he’s not one that seems to stop soon. He won Award for best pop at the Sound City Awards.
Joeboy has stolen the heart of all the Lovers around he’s the African Justin Bieber. We hope to hear more Joeboy pon deck.

Teniola: Makanaki herself, the vibe queen started last year with a hit and ended with another. She just proves to us that there are levels to being talented. She is absolutely amazing because her songs sound appealing and beautiful. The Billionaire EP she released also showed us how consistent she is. She was Awarded with the Best Female MVP at the Spund city Awards, Recording of the year (Uyo Meyo), Pop Single (Case), Viewer’s choice, Vocal Performance, Female all at the Headies. She really puts lots of hard work into her craft.
Zlatan: Zlatan Started the year with a very big bang titled “This year”. He was also one of the most featured artiste of 2019 becoming a Grammy nominee in the process from Burna’s album feature. He also dropped an album that was quite below average due to poor promotion and content rigidity. Zlatan still remains Zlatan and we’re hoping he gives us a repititon of early last year and more. He won the Best New Art and Song of the year at AFRIMMA.