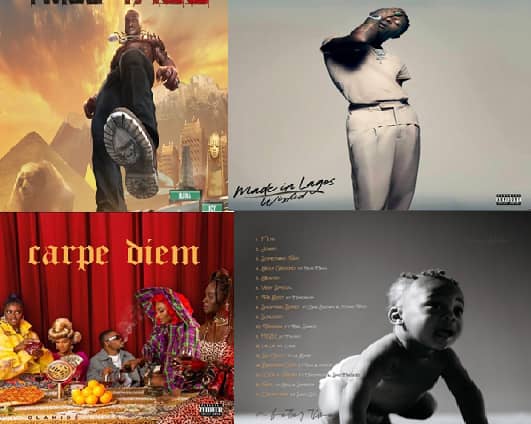 2019 seemed like a peak year for the Nigerian music industry but 2020 left that year’s glory in the dust. It’s that time of the year where we rank projects released during the previous calendar year. 2019 came with a flying start as we got projects from Davido, Wizkid, BurnaBoy, Olamide, Tiwa Savage, Adekunle Gold, Kizz Daniel and several others, it was also a major breakout year for several upcoming acts like Omah Lay, Chike and Bella Shmurda. The review for 2020 would be more of a conversation and less of ranking.

It was disappointing and disheartening that the industry still battles leaks and piracy issues at this point. The industry can’t move forward if there are people who pull others down by putting out unreleased music without proper authorization. It affects the profits of the artistes by dropping their sales and it also kills the expectancy and suspense that comes with new music. Let’s get behind our artistes by not supporting leaks.

I’ve compiled a short list of things that you probably missed while listening to some of the albums we will be discussing in this piece. You probably know some, know none or know all if you paid attention.

1. “But now I’m trynna ride, fuck a good time” this was a line from the song “Real Life” from Burna Boy featuring Stormzy. I can’t say for sure if this connects to Davido’s previous album “A Good Time” but anyone can take a wild guess.

2. “I no be babalawo me I just be singer” This is a line from “Ginger” by Wizkid featuring Burna Boy. This was an obvious reply to Davido from Burna Boy concerning a picture Davido posted saying “Greatest of all time, No Cap”. In the picture Wizkid and Davido were both in “babalawo” apparels. You could connect the dots.

3.“Floppy Disc” Close to the release of Davido’s album, Burnaboy came out one evening and Tweeted “floppy Disc”. While I was hoping this was unrelated to Davido’s forthcoming album, Leriq; Bunaboy’s trusted producer made a controversial tweet that confirmed it was likely a shot at Davido by saying “Why is 32 bit making y’all go crazy?” My guess is he used the 32 bit storage size to pass the message to the right camp; 30BG.
4. “FEM” Arguably the biggest song that came out last year. Davido in an interview with pulse confirmed this song was about BurnaBoy. No doubts.

5.“Ginger” interestingly there are two versions of this song. BurnaBoy confirmed the previous was binned because it was “trash”. I’m Wondering what it sounds like.

6.“Tracks that didn’t make Twice As Tall” Burna had songs with Justin Bieber, Koffee and two other undisclosed artistes that didn’t make the Twice as Tall track list. Burna is also working on music with Nas, Hitboy and Sia.
Lots of amazing projects dropped in 2020 and it’s impossible to mention and go through everything. These are the albums that made the cut in no particular order:

This album is in a class of its own, a lyrical and organized masterpiece. The album stayed on theme from start to finish while touching several topics. The album was executively produced by Diddy. The rollout of this album was something different from usual, the mesh and the comic book released were insights into the creative process of the rollout. The productions on this album was amazing as well not many producers would be able to create finesse and sound perfection on “wonderful” like Telz did . Burna became the first Nigerian to rank as high as #54 on the billboard 200 and bagged a second Grammy nomination. Historical! This album showed Burna grew above his disappointment of failing to win the 2020 Grammy awards and showed the world he can’t be buried.

Going through this album was all shades of good vibes and an obvious depiction of Wizkid’s state of mind while making this album, this reflected in the song titles on this album. Wizkid since signing to Sony had the demand of pleasing a foreign audience, some of his music in recent years did not connect with his local audience. This album was a testament to the fact that Wizkid is past the experiment stage and a master of the art. He blended perfectly with both his local and foreign audience on Made in Lagos. Wizkid took his time in crafting this body of work, he also painstakingly chose the right features. Wizkid’s album debuted #80 on the billboard 200. Hopefully Wizkid is only going higher from here.
Davido – A better time:

“Suddenly from good I’m better” sang Davido on The Best featuring Mayorkun, he was saying he is in a better place than he was when he dropped his last album. Davido came out guns blazing on his album last year featuring superstars like Nicki Minaj, Chris Brown and Lil Baby. This album was largely criticized when it dropped but slowly turned into one of the most played albums in the country, tracks like Jowo, Fem and The Best filled airwaves. A Better Time debuted at #170 on the Billboard 200, many critic called it a flop based on this which I strongly disagree. Davido’s lack of versatility might sometimes hinder him in cracking a foreign audience like his counterparts but so long he’s doing good music that can be enjoyed locally he’s succeeding. Foreign Audience would grow stronger as time goes by. This album is filled with Jams and hits for days.

This is Olamide’s best project in recent years, critics and fans agree with this point of view. However, this album ranked the lowest of Olamide’s albums that made it to the billboard World Albums chart. Like the title suggests you enjoy the moment and forget the future, it really lived up to the title giving us hit songs like Infinity, Unconditionally, Triumphant and Loading. The Outro on this album was perfect and on theme as Olamide rapped about his beginning, life, betrayal and Fireboy sang about wanting everything “plenty plenty”. It was a perfect listen from start to finish.

The Cavemen dropped their Debut Album last year, it was a statement to the fact that they are at the forefront of highlife music. The album was cohesive and stayed featureless. The band heavily portrayed the African culture and root of their sound on the album. Each track was filled with enough gem for listeners.

Artistes and Projects worth mentioning
FireBoy: He released APOLLO in August 2020. APOLLO was a body of work that tried to depict Fireboy as a god (Apollo is the god of light). He kicked off the album with “Champion”, “I’m a King” sang Fireboy on the first track of the album. The album featured elite production from Pheelz, iamBeatz and P.prime.
Celia: This album from Tiwa Savage was fun filled. The album title was inspired by her mum’s name. The album had gems like Koroba, Ole, and Celia’s song.
Abule: Wizkid tweeted on the 24th of December “Patoranking “Abule”! Hardest jam Abeg! Hardest!!” this is amazing coming from an artiste of Wizkid’s status. This song was dedicated to Lagos and his roots in Abule Egba. The rhythm and flow on the song was the highlight of the solemn dedication for listeners.
Again: Arguably the biggest song that dropped this year. Wande coal was in his bag when he made this song. The song centered on his love for women.
Alagbe: Qdot style is cutout from Apala and Fuji. This album centered on love, family, internet fraud and part vibes. Though the delivery on this album was quite inconsistent, it showed Qdot is capable of greatness.
Omah Lay: He dropped two projects in 2020, Get Layd Ep and What Have we done. Both of his projects were welcomed with open hands as it showed Omah Lay’s elegance and unique blend of style. “Godly” was the number one song in the country for over a month when “What Have we Done” dropped.
Yabasi: This album came as a surprise to many considering Basketmouth has not been an active musician since his days as a rapper at the University of Benin. ‘Yabasi’ meaning Onion in Igbo language as depicted on the album’s cover. This album is a soundtrack for his ongoing TV series, Papa Benji. The feature selection and production on this album was excellent.

Essentially, 2020 was an astonishing year. We are very hopeful for the new heights 2021 would be taking the industry to.