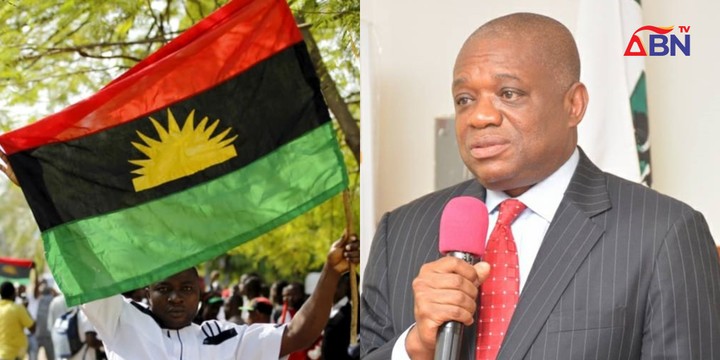 A Northern leader who did not want his identity disclosed said Kalu has been talking to him and several other Northern leaders on the need to grant amnesty to detained members of the IPOB.

The same source also revealed that it was the former Governor and former Director-General of Department of State Security, Lawan Daura with the full consent of the Federal government that secured the release of the Leader of the IPOB, Nnamdi Kanu during his first arrest and detention. But Kanu could not keep to the terms of the release as he jumped bail and has been rearrested.

Another source revealed that Kalu has been in Washington in the past three weeks where he is holding different meetings with top officials of the United States on issues concerning IPOB. Attempts to unravel the discussions with US officials was unsuccessful as lips were sealed on the issue.

Sources at the presidential villa told our correspondent that the Federal Government is considering making the intelligence gathered on Sponsorship of IPOB open. The publication of the lists which have all the transaction details between the sponsors and the IPOB was earlier discouraged as it may further heighten tension in the already tensioned South East.

“My Salary As Oyo State Governor Is 650K” - Seyi Makinde

Recall that the Nigerian Government had through the Minister of Information and Culture, Alhaji Lai Mohammed, said that France was the headquarters of IPOB’s funding. But the European country said it had no knowledge of IPOB’s presence in France.

The Federal Government later reached out to France, explaining that it did not accuse the country of being the sponsors of Biafra but that a large transfer of funds were made regularly from France to IPOB in Nigeria.

It was learnt that the Federal Government had asked the Nigerian Financial Intelligence Unit and the Central Bank of Nigeria to compile the needed information on the sponsors and hand it over to the French government.

The government will also write the Special Control Unit against Money Laundering, which is tasked with the mandate of supervising, monitoring, and regulating Designated Non-Financial Institutions as regards compliance to Nigeria’s Anti-Money Laundering and Combating the Financing of Terrorism.

The source, who pleaded anonymity because he was not authorised by the government to speak on the issue yet, said, “The French Government has reached out to us over the IPOB matter. It said we should give it account details and any other evidence showing that France was where the majority of the money was coming from.

”We Share Her Peacefully” – Twin Brothers Who Married One Wife

Comparing The Nigerian Naira And The Benin Republic Cefa

“My Wife Sleeps With Our Landlord” Man Tells Court

Soulja Boy Is Back In Prison