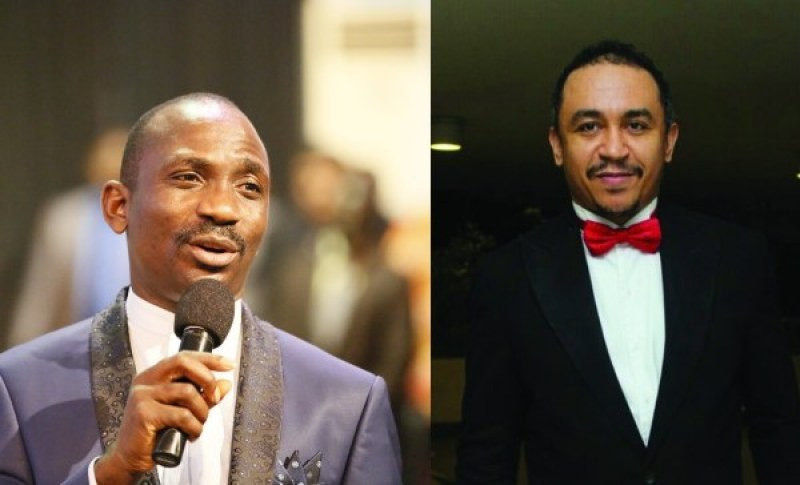 The Clergyman reacted to the trending video, in which Daddy Freeze referred to Bishop Oyedepo as a “bald-headed fowl”. He stated that the media personality lacked moral values and respect and risks the wrath of God if he continues the attacks on pastors in the country.

In a video trending online, Eneche described Daddy Freeze as a ‘Mad Dog’ who needs medical attention, over his careless words on anointed men of God. He said;

At this moment, it is imperative for us to address certain issues for the sake of upcoming generations. Otherwise, when evil is allowed to persist, it would be viewed as good.

The culture of respect is a well-rooted scriptural bible culture.

In Act 23:5, when Paul the Apostle spoke in a careless way, regarding the high Priest Ananias and his attention was drawn, he immediately withdrew his word and apologised.

The culture of respect is also a deeply-rooted African culture. So strong that in parts of this country, in the west, children prostrate to greet fathers and elders.

Yesterday, a man drew my attention from America, regarding a video that was mimicking God’s servant, Bishop David Oyedepo, posted by the MAD DOG called Freeze. MAD DOG emphasized. Someone said, Pastor, why are you calling someone a mad dog, Jesus did that first; he called Herod a wild dog – a fox.

I said MAD DOG because that is spot diagnoses. Spot diagnoses is a situation whereby you know a sickness by just looking at the patient without even asking any questions. What he is exhibiting is mad behaviour.

That is schizophrenia, schizophreniform behaviour. That is mania. That is bipolar disorder. That is attention-seeking psychopathic disorder. A man looking for attention, by all means, trying to pull down people who have built values over the years.

Pastor Eneche also went ahead to back Pastor Ibiyeomie for calling Daddy Freeze a bastard. He asserted that the media personality deserves to be called one, as his conduct portrays that.

When last did a tailor advise a surgeon how to operate? When last did a carpenter tell a Senior Advocate of Nigeria how to stand before the court to defend a case? What do you know about marriage when you can’t keep a home. What do you know about life, success and destiny? Who is a baggage of moral bankruptcy. A baggage of emptiness of character, talking about people who you are a never up to and will never be up to even if they gave you a thousand lifetimes. If you are in the same class of architecture with Bishop David Oyedepo, ask yourself, where will your position be?

That is if you are able to study such a course. Or you are in mathematics class with Pastor EA Adeboye, ask yourself, where will you be found in a mathematics class where he did a first degree in Mathematics and Applied Mathematics in Masters. Where will you be? In his PhD in hydro-dynamics with stokes equation – speciality. Have you heard of that before? Or where will you be in our anatomy class, in pharmacology, pharmaco-dynamics, pharmaco kinetics? What do you know about the etiopathogenesis of diseases? Have you ever heard of such before? What will be your rating in such classes?

They are people who would have defeated you from scratch if you were their age mate. And they will defeat you till tomorrow. Ask yourself this question, how many life times will you need, be able to employ 35,000 people in your organization? That is what Bishop Oyedepo has done successfully and beyond that. How many life times will you need to be able to run two universities world-class? Covenant University is among top 500 universities in the world, it’s number 4 in Africa and number 1 in Nigeria.

What value have you added? What do you have you to offer, other than to stay on the pulpit and speak of what you know nothing about? I advise you, you are already a cursed man, a cursed man by virtue of bankruptcy of everything around you. But you better repent now, otherwise, Jehovah, whom you have stood against will deal with you and your lineage.

Let me give you a final counsel before you talk about married people and people in ministry, go ahead and get yourself a wife, get a family, succeed in the marriage then you have any audacity, temerity or any effrontery to speak further on marriage or on any issue bordering on life and success, otherwise you are a colossal monumental generational waste of existence.

Eneche also took out time to advice the media personality, on starting his own church, since he seemed very interested in pastoring pastors. He said;

Secondly, since you are so interested in pastoring and in pastors, get yourself a church started from the scratch, gather a 100 people physically, gather them up to 1,000 and up to 10,000 and when you are through with that, pray for the sick, deliver the oppressed, help their widows and orphans, and then run it successfully, then you have an advice to give to anybody who is in the ministry, otherwise close your irresponsible mouth forever and never to be heard.

And for everyone who follows gullibly, irresponsible personalities such as this, valueless entities, worthless entities, adding nothing to society, offering nothing. Just don’t waste your life, go face your front and do what you need to do to make a mark in your generation.

where he mimicked Pastor David Oyedepo. A visibly angry Pastor Enenche said the word "Bastard" used by Pastor Ibiyeomie to describe Freeze was apt as he has not exhibited any trait of a child that was well trained as he has often spoke ill of people who are his elders.