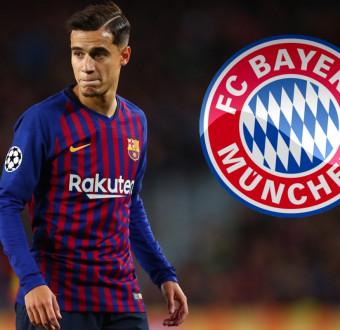 His loan deal is expected to include an option for a permanent move.

The Brazil international and former Liverpool star was left out of Barcelona’s squad for their La Liga opener against Athletic Bilbao on Friday, which they lost 1-0,  due to ongoing talks for his move to Germany.

“We can confirm that there is an agreement in principle for the loan of Coutinho to Bayern,” said Barcelona’s club director, Guillermo Amor, before the league match. We just have to finalise the deal.”

Bayern’s sporting director, Hasan Salihamidzic, added: “I can confirm that [chief executive] Karl-Heinz Rummenigge and I were in Barcelona and we have reached an agreement with the club, player and agent,” Salihamidzic was quoted as telling the broadcaster ZDF.

“Only a few details are still to be sorted out. We are very happy that we will bring this player to Bayern.”

Bayern expect Coutinho in Germany “on Sunday or Monday” for a medical and to sign his contract,

Speaking after Bayern’s 2-2 draw with Hertha Berlin on Friday night, Salihamidzic said: “I can confirm that Karl-Heinz Rummenigge and I have been in Barcelona this week, agreeing with the player and the adviser.”

“We had very good talks and I want to say thank you to FC Barcelona.”

“Medical check and signature and we are very happy to have won this player, it will be a one-year loan deal with a call option.”