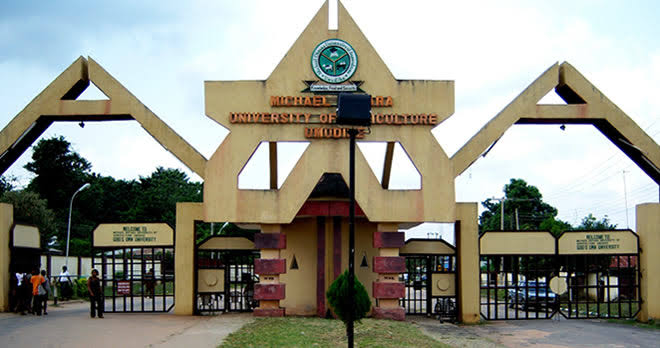 The Vice-Chancellor of Michael Okpara University of Agriculture, Umudike, and the Management are appalled at recent attempts to spread panic within the University community with false reports of an imaginary pandemic killing students.

The first student, a female student whose identity we will not disclose out of respect for her family, was a new intake. Unfortunately, she had procured an abortion from a quack, resulting in fatal complications. She visited the University Health Services Department (clinic ) and although she was unregistered, she was attended to immediately and doctors discovered she had a botched abortion that had become septic.

She was promptly referred to the Federal Medical Centre, Umuahia (a full fledged hospital equiped to deal with severe cases), where she died.

The second unfortunate death was of a student who collapsed on the walkway and was rushed to the University clinic. Although he was also unregistered, doctors and nurses wasted no second to battle to save his life. When he was brought in, he had no pulse and his vital signs were failing. He was promptly loaded into the University’s ambulance and rushed to the Federal Medical Center, Umuahia, where he was declared dead.

The University clinic treats all students in an emergency irrespective of registration. There was no wrong doing in either of these cases on the part of the University.

The Management are deeply saddened by the loss of these young lives and heartily condole with thier families.

Let us once again reiterate that it is compulsory under our rules and regulations for all students to be registered with the University Health Services Department. It is also pertinent for students to avail themselves of the services of the clinic at the earliest signs of ill health.

I categorically state that there is no pandemic in our University and no other student aside from the two aforementioned, unfortunate incidents died in the University.

Media practitioners are strongly advised to verify the veracity of stories they publish and lend credence to.

ASUU Threatens To Go On Strike Over Unpaid January Salaries

If You Say So