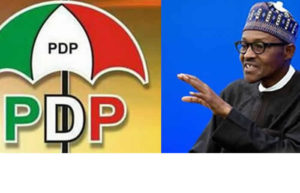 The Peoples Democratic Party on Tuesday called on President Muhammadu Buhari to sack service chiefs over the attack on Kukareta community in Yobe by insurgents; the Zamfara banditry, and perceived worsening insecurity, especially in the North West.

The PDP also said the attacks and worsening insecurity have shown that the strategies of President Muhamadu Buhari, as the Commander-in-Chief, have failed.

The PDP National Publicity Secretary, Kola Ologbondiyan, in an interview with our correspondent urged Buhari to review his parade and make necessary changes.

While condoling with the bereaved families, he urged Buhari to inject new strategies and fresh blood to prevent further loss of lives and resources.

He stated that the recurring deaths of soldiers, other security officers and even civilians was become alarming, adding that efforts and effective mechanisms must be activated to stop such losses.

Ologbondiyan said, “We sympathise with the families of the people that have been killed.

“The PDP has consistently told Mr. President to review his parade. As the Commander-in-Chief, if his men in the front are being killed, he has the responsibility to review his parade, except if there is something underneath that he has not been able to explain to Nigerians.

“PDP holds that more than ever before, the time has come for Mr. President to review his parade.”

Ambode Says He's Wiser Now After A Meeting With Buhari