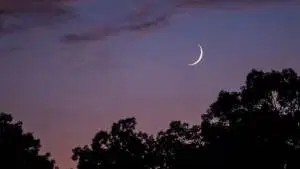 The Shawwal crescent was not sighted in Saudi Arabia on Tuesday. Therefore, Wednesday, May 12, will be the last day of the holy month of Ramadan, and the first day of Eid El-Fitr will be on Thursday, May 13, 2021.

The Shawwal Crescent was not sighted on Tuesday, therefore, Wednesday, May 12, will be the last day of the holy month of Ramadan, and the first day of Eid El-Fitr will be on Thursday, May 13 according to the Haramain Sharifain Twitter account posting live from the Tumair observatory in Saudi Arabia.

The Kingdom’s Moon Sighting Committee at the Tumair observatory did not see the crescent moon on Tuesday, according to Haramain Sharifain. Eid El-Fitr would have started one day earlier had the moon been seen.

The Eid El-Fitr celebrations mark the end of a month of piety and all-day fasting for the world’s 1.8 billion Muslims.

Saudi Arabia’s Royal Court had called on all worshippers in the Kingdom to watch the skies for the appearance of the crescent moon, which must be seen with the naked eye in order to officially mark the beginning of the Islamic calendar month of Shawwal.

Muslims follow a lunar calendar consisting of 12 months in a year of 354 or 355 days.

Eid El-Fitr is traditionally celebrated with large gatherings for worshippers to pray and break their fasts.

Some Muslims continue to fast for six consecutive days following Eid El-Fitr. This practice is considered the equivalent of fasting year-round due to the belief that certain good deeds are rewarded tenfold.

The authorities in Saudi Arabia have this year set up precautionary measures at 20,569 mosques throughout the Kingdom to limit the spread of Coronavirus ahead of an influx of Eid worshippers, according to the official Saudi Arabia Press Agency.

The Ministry of Islamic Affairs is calling on volunteers to help direct the entry and exit of worshipper’s at the Kingdom’s thousands of mosques in order to maintain physical distancing.