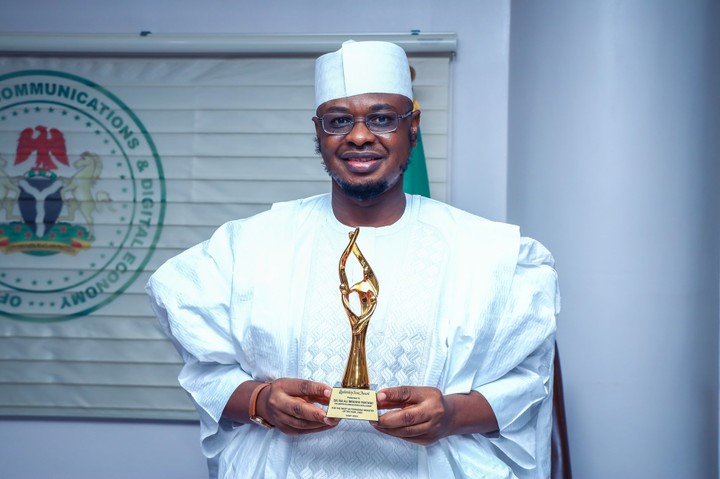 Terror-minded Isa Pantami, Nigeria’s Minister of Communications and Digital Economy, has been adjudged the most outstanding minister of the year.

Revealing this on its official Facebook page on Thursday, the Federal Ministry of Communications and Digital Economy disclosed that the award was conferred on the under-pressure minister by a media outlet, People and Power Magazine.

Explaining why the troubled minister with damning ties and sympathy to terrorist groups and murderous inclinations, the ministry said, “The accolade according to the magazine is in recognition of the laudable policies developed by the ministry under the supervision of the honourable minister such as the revolutionary NIN-SIM data linkage, the National Digital Economy Policy and Strategy for a digital Nigeria, among others.”

The Islamic cleric recently endorsed the 5th Generation (5G) mobile network deployment, awaiting the approval of President Muhammadu Buhari and most recently extended the deadline for the NIN-SIM link to June 30, 2021.

Beloved by Mr Buhari, Mr Pantami plotted with some Muslim leaders to violently wipe away Christians from northern parts of Nigeria.

Mr Pantami chaired a July 13, 2010, meeting of Jama’atu Nasril Islam (JNI), a foremost Isla mic body led by Sultan of Sokoto Sa’ad Abubakar, where it was agreed that Christians should be prohibited from building churches in the city centre across the North and only build churches around designated corners away from the cities.

They also agreed that evangelism should be prohibited, and any attempt by Christians to resist the measures should be met with violence.

“They should know that we have more control of the masses and the youth,” Mr Pantami and other Muslim leaders said during the meeting held at Bauchi Central Mosque. “Any attempt by the Christians to disobey or revolt against the decision shall mean fighting against the religion of Allah which the followers of Allah shall not watch, but we shall violently wipe away the Christians in these states.”

The Muslim leaders also complained about Christians in Plateau and Kaduna and disclosed their plans to cause mayhem by enlisting Muslims in the security agencies as allies.

“The Muslim Ummah in Jos have solemnly resolved to fight the governor, his government and the entire Christians in any way possible. They shall never support this government, and they will destroy any development that shall come to Plateau, even the existing ones.

“Again, they are ready for Jihad in the state as we have presently secured the needed arms. Over 3,000 foreign arms have now entered Jos, and we will not vote during the governorship election,” the communique seen by Peoples Gazette said.

Mr Pantami and his colleagues also concluded that they “shall use our men who are in the military to help us bring arms and ammunition into Kaduna.”

We Are Not Offering ₦1 Milliom To “Yahoo Yahoo” Informants — EFCC

Twitter Users React To A Polling Unit At VGC, Lagos

How The 36 Nigerian States Got Their Names

2019 Budget: PDP Asks Buhari To Apologize To Nigerians For Lying

Its indeed there was a country