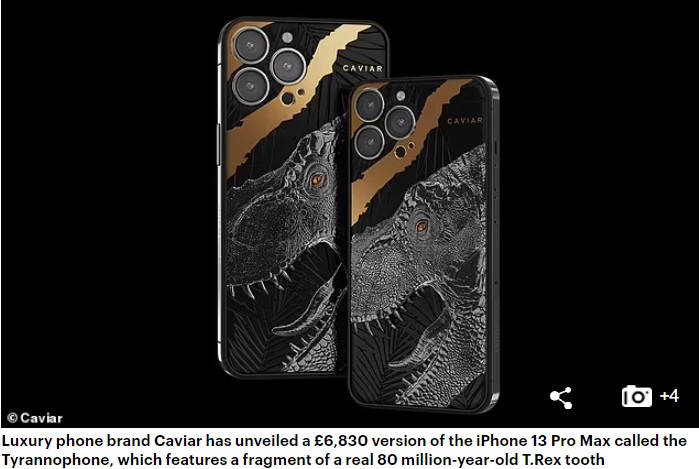 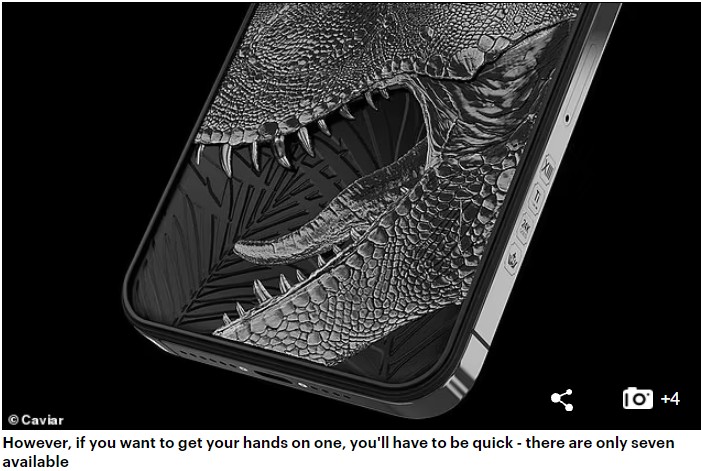 With a price tag of up to £1,549, Apple’s iPhone 13 Pro Max is one of the most expensive smartphones on the market.

But a new version of the flagship smartphone has gone on sale that makes Apple’s £1,549 pricing look like pocket change.

Luxury phone brand Caviar has unveiled a £6,830 version of the iPhone 13 Pro Max called the Tyrannophone, which features a fragment of a real 80 million-year-old T.Rex tooth.

The Tyrannophone is part of Caviar’s new Tera collection, and features an image of a T.Rex.

‘Unique iPhone 13 Pro Tyrannophone is adorned with a 3D image of a dinosaur head that strikes fear into the hearts of your competitors with a gaze of its yellow eye, made of pure amber,’ Caviar explained.

‘The predatory grin of a monster is not just an element of decor, but also an element of exclusivity and uniqueness, because one of the teeth of a tyrannosaurus is real!

‘It contains an insert from a fragment of a real Tyrannosaurus tooth, 80 million years old.’

However, if you want to get your hands on one, you’ll have to be quick – there are only seven available!

‘This terrifyingly exclusive model is only available in 7 pieces, so hurry up to become the owner of the formidable and relentless iPhone 13 Pro Tyrannophone!’ Caviar advised.

Data Of 1.5 Billion Facebook Users On Sale At Hacker Forum

The Tyrannophone is one of three models featured in the Tera collection, which also features a £36,764 version of the iPhone Pro Max, adorned with rubies.

This isn’t the first time that Caviar has come up with a luxury version of Apple’s iPhones.

The exclusive edition, called ‘Total Gold’, is elaborately engraved in an ‘artistic baroque style’ and includes an inscription of the model’s information and unique phone number.

Staples Has Discounted The iPad Mini 4 By $100

Data Of 1.5 Billion Facebook Users On Sale At Hacker Forum