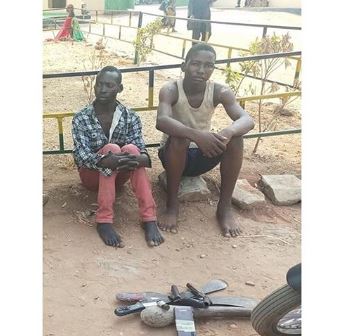 Two armed robbery suspects, Terdue Tivkaa,age 20 and Tarvershima Fazanga,age 19, have been arrested for robbing and raping a 50-year-old woman at her home
in Zaki Biam, Benue state.

The state commissioner of police, Omololu Bishi, said a report
was received at the command on January 20, 2019, that some
armed robbers entered the compound, robbed their victims of
some money and handsets and thereafter raped an old woman.

He said the swift response by Police Operatives led to the arrest of two suspects who mentioned one Solomon as their gang leader.
Solomon, however, died while exchanging fire with the Police in
a bid to evade arrest.

Two locally made pistols, two cutlasses, one axe and two handsets were recovered from them. The police said both suspects, who confessed to the crime, would soon be arraigned in court.

Lecturer Helps To Hold Student Baby While He Teaches