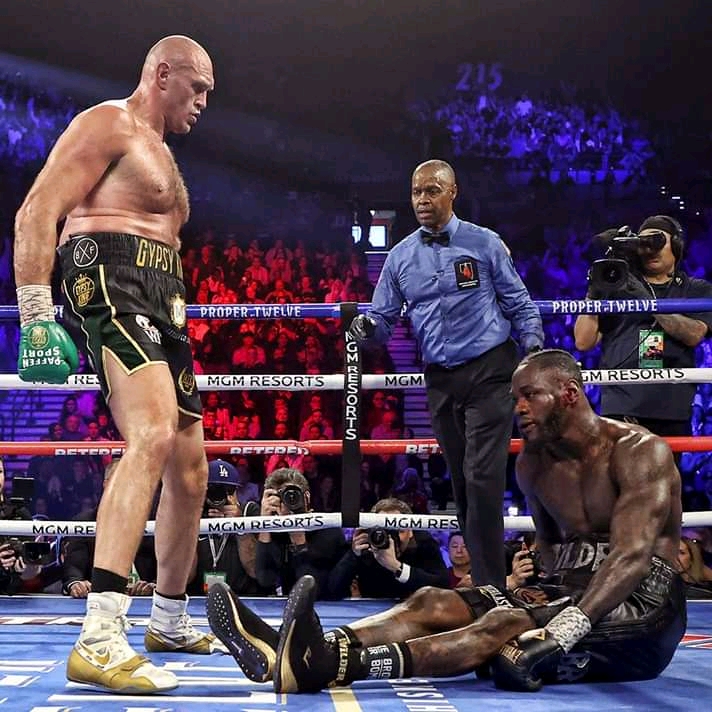 Tyson Fury’s historic heavyweight victory over Deontay Wilder was punctuated with a moment of confusion as he appeared to lick blood off his opponent’s neck.

The Sunday morning, February 23, grandest win inside the MGM Grand in Las Vegas saw Fury stun Wilder in memorable fashion as he twice forced him to the corner to throw in the towel in the seventh round.

Is Tyson Fury trying to lick the blood off the neck of Deontay Wilder 😂😂😂😂 #WilderFury2 https://t.co/qgIrfPuhfK

Despite Fury’s domination through the match, it was the bizarre moment he seemed to lick Wilder’s blood that caught the eyes of many.
In a video that has since surfaced online, the heavyweight stars can be seen locked in the middle of the ring, with Wilder, apparently from the heavy jabs looking dazed and delirious.
It is at this point blood can be seen speckling down Wilder’s neck, before Fury appearing to flex his tongue to have a taste.
The strange moment was captured in the sixth round of the match just after Wilder had been sent to the edge of oblivion.
“This man is a demon,” one fan remarked on social media.
Meanwhile, the victory now means Fury has completed a full set of the world heavyweight belts.
He adds to the WBC, the WBA, WBO, IBF and IBo titles he has previously won after defeating Wladimir Klitschko.

Police Reportedly Kill One, Injure Many In Sagamu (Video)

Gordon Banks, One Of The World’s Most Famous Goalkeepers From England Is Dead

Wetin we no go see