Uche Ogbodo Reveals Why She Got Married To A Younger Person 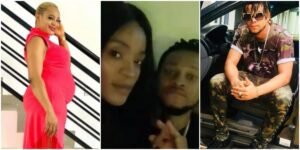 Nollywood actress Uche Ogbodo has opened up on why she is currently in a relationship with a young boy who many perceive to be a teenager.

A few days ago, Nigerian journalist Stella Dimoko Korkus shared a video of the actress and her baby daddy, Identified as Bobby Maris, who many perceived to be a teenager and too young for the actress.

Reacting to some of the social media rants about her baby daddy, the Nollywood actress took to her social media page to say she is happily dating the young boy, unlike her past relationships.

According to Uche, she has been in several abusive relationships where she never found peace, joy and happiness but has to keep it all to herself.

The actress who averred that she had once believed in the father-like figure in a relationship said most of the men she had dated brought pains to her life, including her first baby daddy.

She added that what she suffered at the hands of her first baby daddy cannot be tolerated by any woman, but she is not the kind of person that brings her relationship to social media to rant.

Weeping uncontrollably the actress said she has found joy and peace in dating the young boy who many perceive is a teenager.