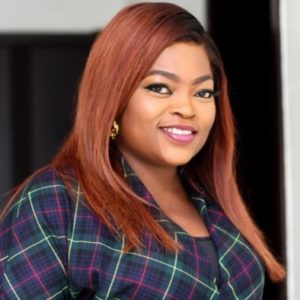 Singer Zlatan Ibile, who was recently gifted a 40k usd chain by Davido has made a subtle appeal to Actress & producer, Funke Akindele to feature in her hit series, ‘Jenifa’s Diary’.

This appeal was made during an Instagram live video session between the two superstars.

The ‘Jenifa’ star prayed for Zlatan in the Yoruba language during the brief Instagram live video on Tuesday, November 12, 2019. “We will both remain successful, may we not be put to shame, God has made us the head, may we not fail. Zlatan,” Akindele-Bello prayed.

Zlatan, who kept on responding saying ‘Amen’ also inquired about the actor and director’s family and kids before subtly pleading to feature in ‘Jenifa’s Diary’. “Please ma, don’t forget me for the next episode oo,” Zlatan said as Akindele-Bello promised to hook up with him soon.